Modern influence sea mines detect the magnetic disturbance of a vessel in the Earth’s Magnetic Field, this is referred to as the vessels magnetic signature. This signature is the most significant influences of those used to trigger to the mine.

To minimize this threat naval vessels are fitted with an on-board Degaussing System (DG). The DG reduces the signature with a counter-acting field, generated from a coil system, connected to loop-coil current amplifiers. Typically 90- 95% of the ship’s signature can be neutralized with a well designed, 3-dimensional DG system. Polyamp have delivered over 40 DG systems, all of which are computer

Polyamp offers several types of loop-coil amplifiers for installation on different sizes of vessels. The location of the loop coil amplifiers can either be centralized in racks or distributed close to the coil. The ADG methodology improves the signature performance and the time and effort needed in ranging relative to a system with only a few large amplifiers.

Polyamp specializes in Advanced Degaussing Systems (ADG), which in general terms means that each coil is individually controlled by one loop coil amplifier (BPAU) and that the coil system is 3-dimensional. Polyamp has had digitally controlled amplifiers since beginning of 1980's and the current version of the Degaussing Digital Control is of the third generation.

Naval operational priorities have shifted from blue water to brown/shallow water. This means that the threat is increased as ships comes much closer to the influence mines. Better degaussing systems than previously used are therefore now required. The answer to this increased threat is ADG.

With ADG the signature is adjusted by changing loop-coil currents. Worldwide operation can be maintained without the need to change connections at the junction boxes or to check ranging before entering the operational area.

The ADG ranging process is much faster, especially when using SWECADE© ranging data acquisition and measurement software with coil modeling. Remote control from the range office can be achieved, quickly and safely by simply connecting a transceiver to the DG system.

The Polyamp powerful ADG systems enables significant savings on the overall installation cost and weight to be achieved by using less and thinner degaussing coil cables. This is of significant benefit to the shipyard.

The ADG is also ideally suitable for the modern principles of sectional building of ships. The location of the Degaussing System components is very flexible and there is no need for a special dedicated operators console to run the ADG. The console function can be one of many other software applications in any suitable PC workstation onboard the vessel. 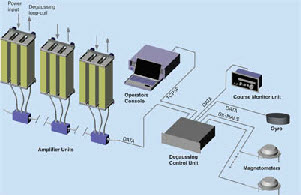 A typical block diagram of a distributed Polyamp ADG system.